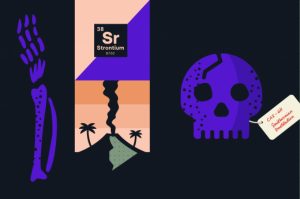 The STRI archaeology lab is currently engaged in an ongoing project to assess the diet, health, and mobility of people in ancient Panama using isotopes. Isotopes are different versions of an atom (carbon, nitrogen, oxygen, etc) that vary by weight based on their different numbers of neutrons. Due to these differences in weight, isotopes behave differently in the environment, as well as in living organisms like humans. By testing them in human bones and teeth, we can figure out what people in the past were eating, where they moved on the landscape, and even get some clues about what the environment was like in the past.

In a report of our results so far, we’re finding some curious patterns among the diets and movements of people that go against our expectations. It seems maize (corn) agriculture isn’t as common as we’d expect in some communities, and it even decreases over time in communities with long histories. This suggests people might have been intensifying their focus on other crops, but what those are remain a mystery. We also found that many more people than we’d expect were moving around the landscape. Some of these movements appear to have been done during life, but some of the people may have been moved after death as part of a burial ceremony. An individual from Cerro Brujo in Bocas del Toro, for instance, appears to have been moved from the volcanic highlands down to the Caribbean, where she was buried at a long-abandoned village by the sea.

Smithsonian’s Sidedoor Podcast features this story in their program, The Mystery Bones of Witch Hill. The podcast interviews various archaeologists involved in the project, including those involved in the original Cerro Brujo excavations and their reflections on how archaeological interpretations have changed over the years as a result of new methods.

If you’d like to learn more about the full study, the initial results have been published in the Journal of Archaeological Science: Reports (and are open access!): https://doi.org/10.1016/j.jasrep.2021.102876