Tropical rainforest-thought to be the oldest landbased ecosystem on earth… certainly the most diverse… the richest in species and in interdependencies! Rainforests are where you find flowers shaped like insects, vines as thick as a man’s thigh, violets as big as apple trees, fish that eat fruit, snakes that <<fly>> by flattening out and gliding through the air, butterflies so brilliant they can be seen from airplanes… 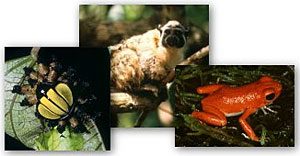 Yet all these astounding diverse forms and habits do one thing: they help rainforest creatures survive. They do it by allowing them to share the three things needed for survival – food, water and shelter.

Rainforests are ancient. They have probably been around for about 60 million years, plenty of time for a tremendous number of species to evolve to fit every available niche. Even though rainforests occupy less than 7 percent of the earth’s surface, almost half of all species of living things are found here-perhaps five million kinds of plants and animals, perhaps far more (see map on last page for distribution).

Take trees, for example. A tropical rainforest contains an average of between 20 and 86 species of trees per acre-compared to about 4 species per acre in a temperate zone forest.

There are more species, but often fewer individuals of each species. In a rainforest, you might easily cross an acre and never see the same kind of tree twice. This is very different from a temperate zone forest, where you expect to keep passing the same kinds of trees.