The canopy, where more species live than anyplace else in the rainforest, is the denser layer of greenery about 20 feet thick formed by the next tallest trees. It acts like a roof over the rest of the rainforest.

This roof is not, however, solid like the roof of a house. It is partially permeable. Its leaves and branches absorb and deflect much of the sunlight pouring downward, letting only a little through. Result: the lower parts of the rainforest are dim and greenish, with only scattered flecks of direct sun. 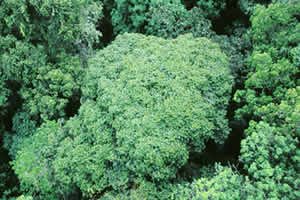 In much the same way, the canopy shuts out most wind and breaks up falling raindrops. A heavy downpour beating onto the top of the canopy roof has, by the time it reaches the lower levels of the rainforest, been turned into a fine rain accompanied by sheets of water streaming down the tree trunks.

When you enter the canopy you leave behind the open, changeable emergent world, and enter a very different place: much darker and more unvarying, a place of dense enclosing greenery and high humidity.

Canopy trees are adapted to his humidity. Their leaves are remarkably similar from species to species, with pointed <<drip tips>> like tiny spouts and glossy hairless surface that helps water roll off easily. Drying off fast is important because doing so discourages the growth of the tiny lichens, algae, and mosses that, in this warm moist environment, are prone to spread over leaves’ surfaces, stealing their light and blocking the opening through which they breathe.

The air is very still inside the canopy, so most plants here rely on animals (unlike most temperate trees and most tropical emergent trees), not wind, to disperse their seeds. To get animals to perform this essential service, plants often encase their seeds in succulent fruit. A large fruit with a large seed inside falls to the ground and the fleshy fruit is eaten, with luck after being carried off to a different place. Smaller fruits containing many tiny seeds may be eaten on the spot. But these seeds too are likely to end up in a different part of the forest, because they have tough covers that allow them to pass unharmed through the animals’ digestive systems. When you see a supermarket display of tropical fruits like mangos and papayas, what you are looking at are the rewards that tropical trees offer to animals for helping them reproduce.

At any time, some of the canopy trees are likely to be in blossom or in fruit. Crowds of birds, monkeys and other animals that eat nectar, fruit, seeds, or leaves have only to follow this moveable feast. If you were up here you might catch sight of a parrot hanging by one foot as it used its other to hold a piece of fruit it was gnawing. Or you might hear the croaking calls of some toucans hopping around in the branches.

Large and strong enough to be safe from most predators, a toucan can advertise its presence with gaudy feathers and a beak so bright it looks painted. It can use this huge beak, almost as long as its body, to signal a mate Toucan picks fruits and berries with the tip of this beak . . . then tosses the tidbit into its throat, like a person throwing grapes into the air and catching them in their mouth.

Many species of monkeys also live up here: spider monkeys, howler monkeys, and sakis. They move through the canopy foliage, using their long, prehensile tails to free their hands to pick fruit, leaves, and other edibles.

Canopy animals like monkeys often follow regular routes through the thick greenery. They have paths that lead to places they visit regularly:to food sources, safe hiding places, or jumpable gaps. A <<highway branch>> tends to be barer than it neighbors, very likely coated with only a thin later of moss, while all around epiphytes grow thickly. Even tiny leaf-cutter antes will prune away vegetation that threatens to overgrow their regular paths along branches.

At sunrise and sunset, the howler monkey troops call from the treetops, asserting their canopy territories. They have an extra large larynx that allows them to produce calls that can be heard over a kilometer away. Since the dense foliage up here screens visual signals and muffles sound, communications among canopy animals can be difficult. A loud voice is an asset, particularly a voice in the low frequency range (like a foghorn) which carries far better than higher frequencies through the thick leaves and branches.

But vertebrates like the toucans and howler monkeys constitute only a tiny minority of canopy creatures. Insects form the vast majority. Considering that scientists have found over 950 species of beetle on one tree alone (in Panama), you can imagine how crowded the canopy is with tiny invertebrates, many of which are tropical varieties of insects you are familiar with, like bees, ants, wasps, and butterflies.

Of course, these insects attract animals that eat them, like the pygmy anteater, for example. This creature, about the size of a squirrel, is toothless but has a long sticky tongue to suck up antes and termites. It is well equipped for life in the trees. Its prehensile tail is strong enough to hang its whole body from, and its feet are adapted to climbing.

Many areas of these animal’s canopy homes are missing due to gaps that are created by falling trees, caused by natural treefalls or man-made clearings. The fallen trees begin the process of forest regeneration. The size of the opening depends on the size of the fallen tree crown and how much surrounding vegetation was also brought down as a result of the treefall. This opening of the canopy brings about stressful changes in the understory microclimate. More light, higher temperatures, and less humidity are created. Research at the Smithsonian Tropical Research Institute in Panama has shown waves of growth in gap areas. The first are plant species from the forest edge, like grasses and soft stemmed plants. They are short lived. A second wave of secondary species then grows tall and fills in the gap. Although the adults of these secondary species still persist for many years, increasing shade discourages further recruitment of their light-demanding seedlings. Instead, the more shade-tolerant seedlings predominate. Gradually, the saplings of the original forest tree species replace adults of the secondary species. Over time they take over and eventually complete the closure of the canopy gap.