The top of the rainforest is a different world from the bottom, primarily because the main layer of treetops forms a barrier that cuts off most of the light and wind, and a good deal of water, from below.

We will be referring to four layers. From top to bottom, they are: the emergent layer, the canopy, the understory, and the forest floor. Though the layers are related, each is a distinct world. And the plants and animals that live in each will need characteristics that suit them to the unique conditions of their particular surrounding.

At the very top of the rainforest, a few trees considerably taller than all the rest stick up out of the greenery, like giants looking over the heads of a crows. These scattered tallest trees form what is called the emergent layer.

These emergent trees, protruding as they do, each at some distance from neighboring emergents, bear the full brunt of all extremes of weather. Winds toss and churn them. The tropical sun beats down on them, drying them out. Rainstorms pummel them. Up here, temperatures drop from hot noons to cool nights, and rise again.

To thrive above the canopy, plants and animals must be adapted to a bright, open, changeable world. Between rainstorms, the climate here is often dry because of the bright sun and strong winds. Emergent trees cope with this dryness by producing tough little leaves whose small surface area and waxy coating keep evaporation to a minimum.

These emergent trees also use to full advantage the resources that these heights offer. They make the most of the open space that surrounds them bye spreading their foliage out wide so their leaves catch as much sunlight as possible. 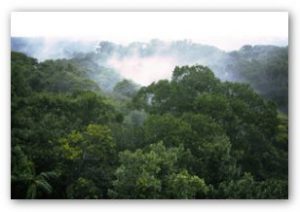 They make use of the wind to disperse their pollen and seeds. Many emergent trees produce seeds with wings, so the wind can carry them away from the ground directly below, where they would be competing with the parent tree for food and water.

For emergent-level animals, sheer size is an important factor. Many of these topmost branches could not bear the weight of a large animal so, not surprisingly, many of the creatures that live up here move around by flying or gliding. One of the top predators up here is a flier: the harpy eagle, a fierce hunter perfectly adapted to life from a home base in these tallest rainforest trees. A few powerful wingbeats carry it from one treetop to another as it seeks its prey, its mottled coloration blending in perfectly with bark and leaves.

Since much of its view downward is obscured by branches, it relies on excellent hearing, as well as vision, to locate prey, a capuchin monkey, perhaps, or a sloth, a macaw, or a snake. The harpy eagle’s long tail and short, broad, rounded wings suit it to hunting. It can drop almost vertically. It dives and twists through the leaves in pursuit of its prey, seizing it finally in its powerful talons. Though the harpy eagle weighs only about 20 pounds, its feet are almost as large as a man’s, armed with claws that stab inward as it squeezes its victim… which  it then carries back to its nest to eat at leisure.

Pygmy gliders, from New Guinea, have a completely different approach to getting what they need at the top of the rainforest. This tiny mammal (no bigger than a shrew) is protected from predators by the secretiveness of its life. Under cover of darkness, it feeds on insects, sap, and buds in the emergent treetops. By day it rests packed together with others of its kind in a leaf-lined hole in a tree.

Though it has no wings, a pygmy glider can move around easily up here. It has flaps of skin between its front and rear legs. When it extends its limbs, it can glide forward and downward, steering with its hind legs and its tail (which looks very much like a feather). Its feet give it a safe grip when it lands on a branch. Each finger and toe ends in a short, sharp claw. And, to increase traction, its paw pads have grooves, a little like the treads on a running shoe’s sole.

Them, around 200 feet above the ground, the way temperate zone butterflies visit wildflower after wildflower in a ground-level meadow. Male Morpho butterflies gather up here to attract females. They are so brilliant blue that low-flying pilots have caught sight of them from airplanes.