In Panama there are 120 species of bats. In the entire U.S. there are only 44 species. There are roughly 70 different species on Barro Colorado. 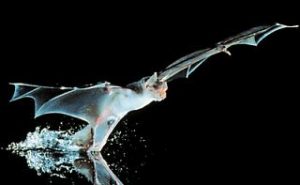 Why are there so many species here?

Bats that eat nectar carry pollen from one tree to the other. Without bats, various types of trees can’t reproduce themselves. One bat feeds on fish!

Among insect eating bats, some catch their prey as it flies through the air. Others catch prey on tree trunks, walls or other stationary objects.

This bat sometimes hangs from the screens of the Barro Colorado Visitors Center. It also roosts in trees. Every night when a male leaves his roost, he does a flutter dance and sprays the females with perfume to identify them as his family harem.

Of the 120 bat species in Panama, only a single species, the vampire bat, can harm humans. It is uncommon in the forest, but more common in cattle ranching areas. 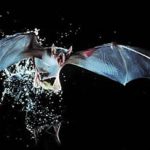 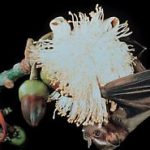 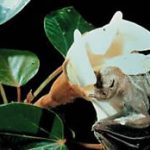 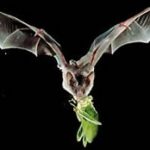 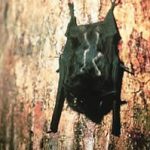 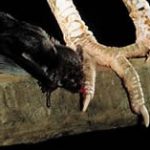 By trapping a bat in a mist net, one can find out

What kind of bat is it?

Is it male or female?

Is it pregnant and/or lactating?

Is it genetically related to other bats in the area? (take blood sample)

How much does it weigh?

Does its weight change?

How big is it?

What does a bat do all night long?

To find out, a tiny transmitter is attached to the body of the bat with surgical glue

How much time does it spend looking for food?

How much time does it spend eating?

How much time does it spend sleeping? 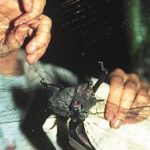 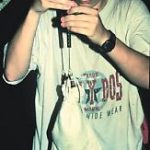 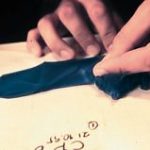 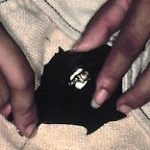 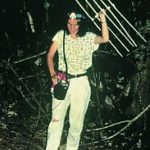 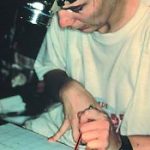 Bats do something we can’t do: they navigate using sound

The sound bounces off of objects (like insects or trees) and comes back as an echo that the bat uses to tell where the objects are by nothing the time that it takes for the echo to return. This is called “echolocation”.

Elisabeth Kalko (visiting scientist) uses a special tape recorder to record the sound that a bat is making.

The bat makes long signals as it seaches for an insect. It makes many short signals in order to locate the insect precisely. After capturing it, the bat produces long signals again.

She also uses a camera hooked up to multiple flash units to take a series of picture of the bat`s movement as it catches an insect.

Each bat species has a unique signal that depends upon where it lives and what it eats.

Now scientists can record the calls and identify species of bats that fly too high to be trapped in mist nets. 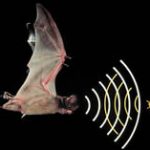 The bat emits sounds that are so high in frequency that we can’t even hear them. 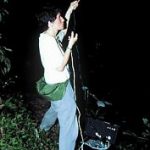 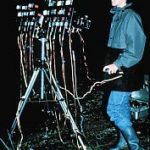 Bats fly with their fingers. Their wings consist of delicate membranes that strech between their “finger” bones. The “thumb” is a small claw used to crawl along surfaces and to hold their food.

If you find lots of insect wings at the base of a hollow tree, look inside, there may be bats there. Bats often take their food back to a safe “feeding roost” to eat it.

A weekly collection of insect wings left by bats under the stairs in one of the dormatories on BCI showed researchers what bats were eating all year round. Their diet changes according to the availability of insects. 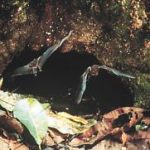 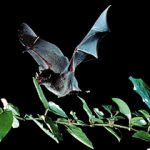 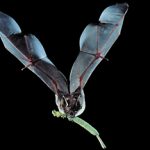 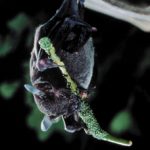 Researchers estimate that fruit eating bats on Barro Colorado move 25-50 MILLION fruits per year. If you discover bat droppings under a sleeping roost, check to see if they contain seeds. You may want to plant the seeds to find out what they are.

The howling sound is produced by resonating air that is forced out through a large hollow bone in the male’s throat. 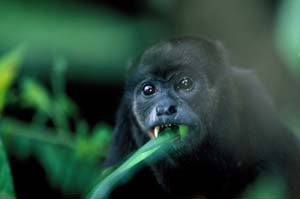 Here’s how it sounds!

Bot fly larvae develop in the skin, forming large lesions. The larvae do not kill the monkeys, but may further weaken animals that are already suffering from malnutrition.

Screw worms, the larvae of another type of fly, may enter empty bot fly lesions or wounds, and almost always kill their host. In the 1950’s, the number of monkeys dropped to only 250, maybe as a result of a yellow fever epidemic. This disease, spread by mosquitos, affects humans, too.

In 1927, Donato, the Island caretaker, captured a baby howler.

“Claudia” lived in a cage, loved to play on ropes, and to eat the leaves of a tree growing there. She howled in despair when she heard passing troops of monkeys go by, and after a year she “died of a broken heart.”

“What do monkeys eat?”

Food is scarce during the middle part of the rainy season (July and August), and during the transition from winter to summer (December).

How many howler monkeys are there?

Dawn census: In 1977, 25 volunteers went to different points on the island. They counted a total of 65 troops howling. Since there are about 19 monkeys per troop, they calculated that there were more than 1200 howler monkeys on Barro Colorado Island.

The number of monkeys has not changed very much during the last twenty years.