If you do not see animals…look for their signs: tracks in the mud, bits of food that they have dropped, scat. These signs are a language in themselves. They tell you about an animal´s activity over time: where it was, if it was running or resting, what and when it was eating, where it slept. In the exhibit we show plaster casts of tracks made on Barro Colorado. In the web version we present drawings of both tracks and scat from each animal. Thanks to Jaime Marcelo Aranda Sánchez for allowing us to scan his drawings from “Rastros de los Mamiferos Silvestres de Mexico: Manual de Campo” published by the Instituto Nacional de Investigaciones Sobre Recursos Bióticos, Xalapa, Mexico in 1981. 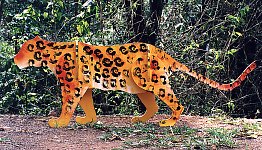 In 1993, we first found jaguar tracks on Gigante Peninsula. A few days later, we found tracks on the Island.

The jaguar swam across the channel! Only two people saw it. From its tracks we know that it stayed on Barro Colorado Island for about four months. Later, it disappeared, maybe to look for food in the nearby national park. 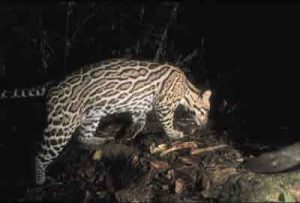 Ocelots look a bit like jaguars (black spots on a yellowish background), but are much smaller, about the size of a medium-sized dog. We rarely see them, but their tracks tell us that they are active on Barro Colorado, especially at night, when they hunt for rodents and other small animals. 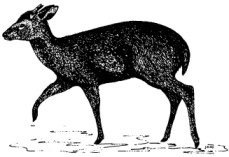 This small, slight deer prefers dense vegetation, but is sometimes spotted on trails. It eats fruit, fungi and plants that grow on the forest floor. Its tracks are much smaller than those of the white-tailed deer, which is common in mainland areas of the nature monument.

One has to walk quietly (and usually alone) in the forest to see a band of peccaries (wild pigs).

Although an occasional peccary may be very friendly (“Pancha” befriended the caretaker at one of our field stations, and came to visit regularly), peccaries are generally very shy. They move through the forest in a group. We see their tracks around the bases of palm trees where they have been eating palm seeds and the places were they were rooting with their snouts. We also smell the musky scent from the gland on their back, which they rub on trees and vines to mark their passage. 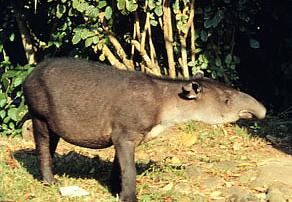 In the 1960´s tapirs came to the old dining hall to be fed…Now we don´t feed them. People here decided that the idea of a wildlife reserve and biological station is that the animals should be allowed to live with the least amount of human intervention possible.

Tapirs are the biggest mammals in the forest. They may weigh more than 600 pounds (150-300 kilograms). Tapirs eat plants, seeds and fruit and seem to prefer swampy, wet areas. Once common in the forest and lowlands, tapirs have been hunted almost to extinction and are uncommon, even in the nature monument.

These two big rodents are common in the forest. Agoutis wander about the laboratory clearing and the nature trails during the day and are easy to spot.

They seem to have gotten used to the presence of researchers and visitors in this nature reserve where they are not hunted. Pacas, one of the favorite game animals in Panama, are slightly bigger than agoutis and are active in the forest at night. In the 1970´s Nick Smythe, a STRI staff scientist, started a program to raise pacas in captivity in order to encourage people to eat captive animals rather than wild ones. 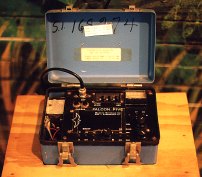 To study where animals go and what they are doing, we sometimes use radio transmitters. The transmitter is glued to or inserted under the skin of an animal, or worn on a collar. Using this receiver and antenna, we can detect and follow a radio signal.

Several years ago, a researcher put a radio collar on a coati mundi (an animal like a raccoon with a long tail). The coati disappeared. Later, the researcher found the signal. It was coming from the lake! Apparently, a crocodile ate the coati and the transmitter ended up in its stomach.

A bat researcher could not figure out where the signal from a transmitter that had been attached to a bat was coming from. Finally, she realized that the bat was asleep inside a hollow termite nest, hanging from a tree.