This exhibit is about tropical forest research on Barro Colorado Island.

Barro Colorado is the top of a hill that became an island when central Panama was flooded during the construction of the Panama Canal in 1911. A small group of North American scientists established a research station on the Island in 1923. 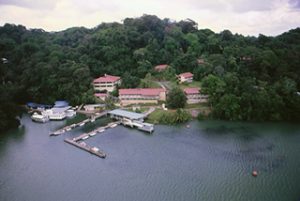 In 1966, the Smithsonian Institution created the Smithsonian Tropical Research Institute, which includes Barro Colorado as well as marine research stations on both coasts of Panama.

Barro Colorado Nature Monument was designated under the terms of the Organization of American State’s Convention for Protection of Nature and Wildlife and the Torrijos-Carter Treaties signed by the panamanian and U.S. governments in 1977. 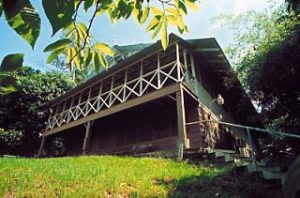 This building was the first Island laboratory.

Inaugurated in 1925 (above), the building was renovated as the Visitor’s Center with funds from Fundacion Natura and from the Eisenmann and Silberglied memorial funds. 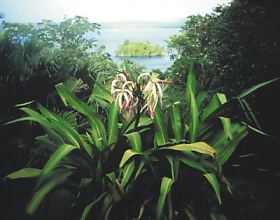 The terrace, with this view of the Panama Canal, has been the site of informal conversations that have led to major discoveries about the tropical forest over the last 90 years. 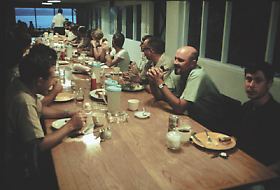 When a new laboratory was built in 1950, the first floor became the dining hall.

You are visiting the exhibit that was installed in 1997…Welcome!