Here’s a selection of the skulls that researchers find on Barro Colorado. First, take a look at each skull. Can you guess what the animal eats from the shape of its head and from its teeth? Scientists who have spent lots of time looking at skulls carefully can often tell the age of the animal, its state of health and sometimes its cause of death. For example, a bullet hole would mean that a poacher (it’s illegal to hunt in the Nature Monument) shot the animal. Tooth marks may mean that the animal was eaten by a predator. Fractures may lead one to believe that the animal fell from a tree. 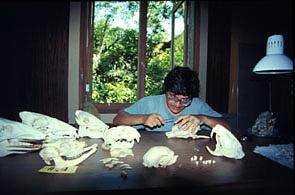 Natural History: Active both during the day (diurnal) and during the night (nocturnal). White tailed deer are not common in mature tropical forest, preferring more open habitat. There is some dispute about whether or not they occur on Barro Colorado Island, although they are certainly present on the mainland within the Nature Monument.

Conservation: Common. Hunted for meat and sport. Some local populations are threatened due to extensive hunting.

Conservation: One of the most hunted animals in the forest, its meat is considered to be a delicacy. Hunted to extinction in some areas.

Conservation: Widely distributed species, common. Hunted for meat, but difficult to see, therefore not as affected by hunting as other game animals.

Natural History: Primarily active during the day (diurnal). Coatis often move in groups of 10 to 30 individuals.

These groups are formed by the females and the juveniles. The males are usually solitary and territorial, joining the group during the breeding season.

Diet: Omnivorous, they eat almost anything that they find in the forest: fruit, flowers, small animals (insects, snakes, worms). They often climb trees to reach fruit there.

Distribution: North, Central and South America. From Southern Texas and Arizona, throughout Central America, to the East Coast of Colombia, Ecuador and Peru.

Conservation: Not an endangered species. Scarce in some areas, but one of the species that is most frequently seen (often as a road kill) in areas near cities.

Natural History: Mainly active during the day (diurnal). Peccaries travel in groups of 1-20 individuals, usually 6-9. Males may be solitary.

Peccaries move in lines along trails that they mark by digging up the soil at the base of trees, and by defecating and rubbing their scent glands on the bark of trees. They are very shy, which makes it difficult to get close to them. They may stampede when they detect the presence of people. In some areas, they are raised as pets. This is the only species of wild pig on Barro Colorado Island.

Diet: They are omnivorous, eating fruit, seeds, insects, larvae and small animals such as toads, rodents…etc.

Conservation: Intensively hunted for meat and for sport. Rare near human settlements, but locally common in protected areas.