Are female swallows from the tropics more faithful
to their mates than their northern counterparts are?

Innumerable studies of birds in North America and Europe have shown that the chicks in a single nest may have different fathers. The female may mate with more than one male, although only one of them, her “mate” is present at the nest.

Here in the tropics only a few studies have been done. These suggest that the female is almost always faithful to her mate: all of the chicks in a nest have the same father.

If we do more studies, will this conclusion change? 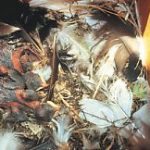 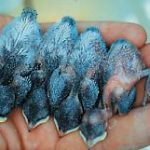 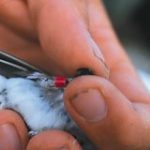 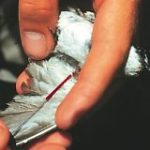 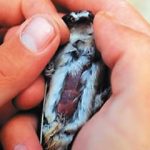 Nest box in a dead tree in Lake Gatun.

Who is my father? The chicks from a single nest.

We use bands to mark/distinguish individual birds.
We take blood samples from the male who is present at the nest and from the chicks to determine if he is their father.

The females have a patch on their breasts that distinguishes them from the males.

Chestnut Headed Oropendula
Psarocolius wagleri
This bird lives in colonies of up to 100 nests that hang from the uppermost branches of trees.

Rufous Breasted Hermit
Glaucis hirsuta
This hummingbird constructs a nest that is attached to the underside of a Heliconia leaf.

Green Shrike Vireo
Vireolanius pulchellus probably…
Although its song is commonly heard in the forest, its green plumage and its custom of staying high in the treetops makes the green shrike vireo almost impossible to see. This nest was found on a fallen branch.

Little Tinamou
Crypturellus soui
The Little Tinamou lives in disturbed forest. It lays its eggs directly on the soil without constructing a nest. It has disappeared from Barro Colorado where the forest is more mature. 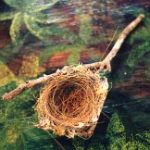